Julia Kae History The Julia Kae was originally built in 1972 and has fished in Southeast Alaska its entire career. In May of 2017, Julia Kae was involved in a catastrophic fire that started on a neighboring vessel. After months of hard work and careful planning, Julia Kae has been completely refurbished and upgraded. She looks, feels, and smells like a brand new boat. The vessel has been upgraded with additional enhancements in preparation for use in charter operations.

The logo of the Julia Kae and our company shows an eagle, raising like a phoenix from the ashes to a new life - a most apt symbol for the rebirth of the Julia Kae. It was created by Alaska Native artist Ronnie Fairbanks, who is also Steve's cousin, from Steve's descriptive vision.

Typically, a bird’s wings have feathers that flow downward. A phoenix’s wings rise up as the mythical bird rises from the ashes. Steve is a Tlingit native from Southeast Alaska. In his tribe two of the clan houses are eagle and raven. He is an eagle. Eagles marry ravens and vice versa. Being a matrilineal society, the children are then what the mother is. In one wing of the eagle is a raven head, depicting the family under his protective wing and close to his heart. Another symbol of Steve’s family history is the frog, depicted in the other wing. In the belly of the eagle is a salmon, because of Steve’s long history as a salmon fisher, and, salmon are meant to be, and enjoyed to be eaten. The image in the tail is a humanoid figure, a feature added by the artist.” 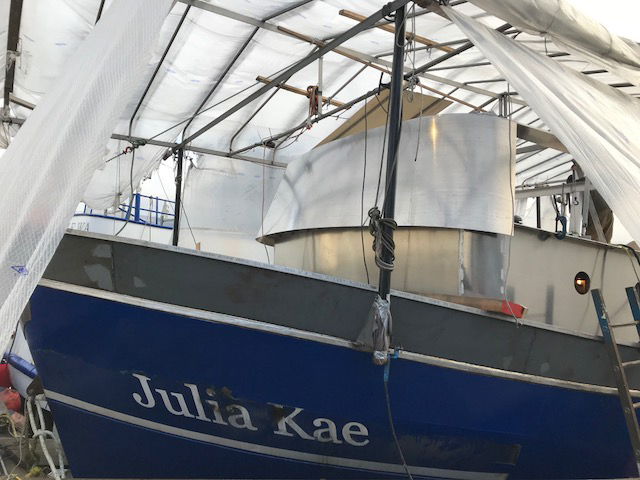